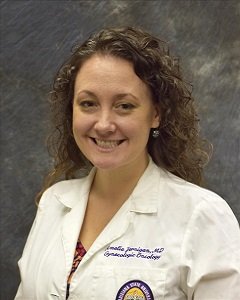 Dr. Amelia Jernigan is the Director of Gynecologic Oncology with the LSU Health Sciences Center Department of Obstetrics and Gynecology. She completed her medical degree at Jefferson Medical College in Philadelphia, PA where she was inducted into the prestigious Alpha Omega Alpha honor society. She then completed her Obstetrics and Gynecology Residency at Johns Hopkins Hospital in Baltimore, MD, where she served as Administrative Chief Resident and won the Ungula Sinistra award in recognition of her surgical skills and exceptional care of women with gynecologic cancer. This was followed by a fellowship in Gynecologic Oncology at the Cleveland Clinic in Cleveland, OH. As a Gynecologic Oncologist she specializes in the comprehensive care of gynecologic conditions. She has expertise in advanced surgical procedures and administers systemic anticancer therapies including chemotherapy, immunotherapy, targeted therapy and hormonal agents. She has extensive experience with HIPEC dating back to her fellowship in Cleveland. She works closely with other cancer care experts and team members such as radiation oncologists, medical oncologists, palliative medicine providers, general obstetrician gynecologists to ensure that you have a clear, well-rounded, and evidence based treatment plan.

Dr. Jernigan is a Fellow in the American College of Obstetrics and Gynecology and is board certified in both Obstetrics and Gynecology and in Gynecology Oncology. She is an active member of the Society of Gynecologic Oncology and serves on the Communications Committee. She is also an active member of the NRG and serves on the Rare Tumors Committees. She has published and presented dozens of scientific abstracts and articles over the past several years and is actively engaged in research, hoping to advance the care and treatment options available to women with gynecologic cancers.