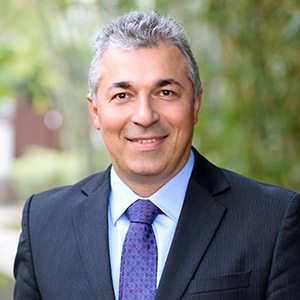 Dr. Mehdi M. Kebria is affiliated with City of Hope.

Mehdi M. Kebria, M.D. grew up in a family of physicians and is proud to carry on that tradition. He is board-certified in gynecologic oncology and obstetrics and gynecology and specializes in ovarian, cervical, vulvar and uterine cancers.

A sought-after medical expert, Dr. Mehdi appears frequently in the media as an expert on women's cancers and has published dozens of peer-reviewed articles.

A native of Iran, Dr. Kebria received his medical degree from Shahid Beheshti University of Medical Science in Tehran. He completed residencies at University of Connecticut (General Surgery), the Cleveland Clinic (OB/GYN) and the Mayo Clinic (Gynecologic Oncology).

Corona – Ovarian cancer is the fifth leading cause of cancer death among women in America today. It is estimated that over 22,000 women will be diagnosed with in 2018.

To combat this disease, new treatments are being developed every day and Dr. Mehdi Kebria of City of Hope’s Community Practice Sites in Corona and Rancho Cucamonga is helping to lead the way.

One of the promising new treatment options Dr. Kebria is helping to pioneer for ovarian cancer is a targeted form of chemotherapy known as Hyperthermic intraperitoneal chemotherapy (HIPEC).

HIPEC is a highly concentrated, heated chemotherapy treatment that is administered during surgery. Unlike traditional chemotherapy, which circulates throughout the body, HIPEC delivers chemotherapy directly to cancer cells following the surgery.

Because the chemotherapy is concentrated to one area it does not have the side effects, such as hair loss, of regular chemotherapy. HIPEC has been shown to increase survival by up to five years and in some cases can lead to a complete recovery. Thanks to advances like these in treatment, the occurrence and mortality rates for ovarian cancer has been decreasing.

For more information on HIPEC and other cutting edge treatments including immunotherapy and minimally invasive robotic being developed by City of Hope, please visit cityofhope.org.