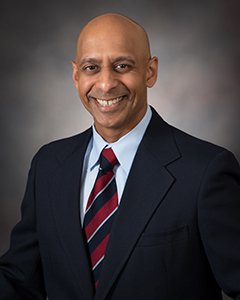 Dr. Prakash Pandalai is affiliated with University of Kentucky

Dr. Pandalai comes to the University of Kentucky with nearly a decade of experience in caring for patients with complex gastrointestinal malignancy. Previously he was a staff surgeon at the National Cancer Institute where he gained extensive exposure to HIPEC and other novel treatments for advanced stomach, pancreatic and liver cancer, while also serving as a primary investigator on clinical trials. Additionally he has served in the USA Army Reserve with Forward Surgical Teams in both Afghanistan and Iraq. He continues to serve our Veterans at the Lexington VA medical center and the Markey Cancer Center at the University of Kentucky.

Cytoreductive surgery and HIPEC are often thought of as a combination operation, but it’s actually 2 separate procedures, according to Pandalai. The goal of cytoreductive surgery is to remove all the gross visible tumors, resulting in a multi-visceral resection during which a small piece of the intestine, colon, or appendix can be removed if they are found to have tumor deposits. After surgery is complete, it’s important to understand that the abdominal cavity can contain additional cancer cells following cytoreductive surgery, Pandalai explains. As such, catheters can be placed inside the abdominal cavity, allowing it to be profused for a period of time with chemotherapy that is infused in a heated solution. Investigators set out to determine the value of each component of this regimen through the PRODIGE 7 study, during which patients were randomized to receive cytoreductive surgery with or without HIPEC. Through this approach, investigators were able to assess the efficacy of HIPEC, Pandalai concludes.