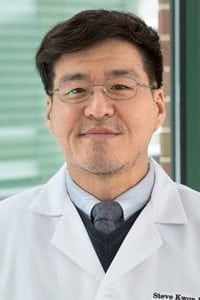 Dr. Kwon is a surgical oncologist who specializes in treatment of patients with primary and secondary peritoneal carcinomatosis. His excellent patient care and advocacy have led to him being recognized as the 2017 American Cancer Society's Medical Honoree. Particularly to HIPEC treatment, his patient, and the HIPEC team at Holy Name Medical Center have been featured on CBS. See video story above. He is the principal investigator of a HIPEC clinical trial at Holy Name Medical Center.

Steve Sung Kwon, MD, MPH, is a board-certified, fellowship-trained surgical oncologist and health service researcher interested in improving surgical quality for cancer patients. He specializes in the management of primary and secondary liver cancer, as well as cancers of the gallbladder, bile duct, stomach, intestinal, colon, rectal, and thyroid. He is also an expert in malignant diseases of the pancreas, neuroendocrine tumors, soft tissue sarcoma, melanoma and adrenal tumors.

Dr. Kwon earned his medical doctorate from the University of Illinois College of Medicine, where he had been named an Edmund James Scholar; and his master of public health degree in epidemiology from University of Washington Medical Center, where he also completed his residency. During his fellowship at Memorial Sloan Kettering Cancer Center, he trained in complex surgical oncology, emphasizing liver, pancreas and foregut surgery with extra training in minimally invasive approaches, including robotics. Dr. Kwon also holds a Global Health Certificate from the University of Washington Department of Global Health.

Dr. Kwon is engaged in clinical research to investigate the use of quality improvement metrics among surgical patients. While at the University of Washington, he and his colleagues successfully implemented a general surgery program that reduced complication rates by nearly half and significantly decreased the variations in outcomes throughout the state. During his fellowship at Sloan, he studied the impact of complications on cancer patients' long-term survival after undergoing surgery. By applying similar concepts to surgical oncology, he hopes to improve quality and narrow the gaps in cancer outcomes.

He is widely published on surgical oncology topics and has presented his research at academic assemblies throughout the U.S. Dr. Kwon is fluent in Korean and conversant in Spanish.